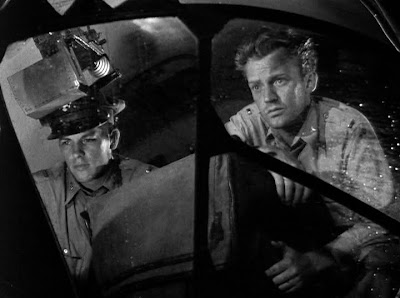 Still on an Arthur Kennedy kick, so watched Air Force. It's a film about the crew of a B-17, sent to Hawaii on the eve of Pearl Harbor, and then on to Wake Island and the Philippines. It's a good, serviceable film, but nothing particularly special or memorable, but definitely worth a watch. Some really nice aerial footage. I've always been fond of B-17s, and so spending time in one in a movie is never a bad thing. I like that we get to see the different stations on the plane, what the crew does while they're just cruising along trying to get somewhere, the necessity for the crew to function as a complete team in order for the plane to function.

There isn't much plot to this one. We're mostly just along for the ride with the crew as they stop at the famous battles, and then finally get to engage in one of their own. There's a few routine subplots -- the soldier (John Garfield) with a chip on his shoulder whose enlistment is up, who naturally stays in after war breaks out. He also flunked out of pilot school, but still gets to use those skills to save the plane. There's a pursuit plane pilot (James Brown) who complains mightily about those clunky big B-17s -- and then naturally ends up joining the crew and changing his tune. There's the old-timer (Harry Carey) whose son in Manila dies in combat (one of the truly sad and effective moments in this film). There's a cute dog named Tripoli the marines at Wake Island pass off to the B-17 crew, knowing they're going to get wiped out.

Not nearly enough Arthur Kennedy to suit me, but the other characters were interesting enough to keep me paying attention.
Posted by DKoren at 10:45 AM