This is the annual survey questions from Noodle in a Haystack! Pop over to her site to read other bloggers answers. 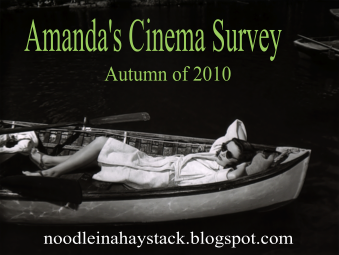 1. What is your favorite movie starring William Powell and Myrna Loy, excluding all of The Thin Man films?
Alas, I haven't seen any of their films other than the Thin Man series, which I've seen all of.

2. Name a screen team that appeared in only one film together but are still noteworthy for how well they complimented each other.
I can't think of one, although I know there are plenty!

3. Fred Astaire and Ginger Rogers' best film together?
I think Top Hat, although my personal favorite is Swing Time

5. An actor/actress who, when you see one of their movies, you always wish that someone else was in his/her role?
Henry Fonda

6. An actor/actress that someone close to you really loves that you can't stand or vice versa?
My sister and I agree on most everything, no polar opposites on anybody.

7. An actor/actress that you both agree on completely?
Anthony Hopkins

8. Complete this sentence: Virginia O'Brien is to Ethel Merman as...
hm, every comparison I've come up with doesn't quite work...

9. What is your favorite film starring Ray Milland?
The Big Clock

10. You had to have seen this one coming: what is your favorite movie of the 1960s?
The Dirty Dozen

11. An actor/actress that you would take out of one film and put into a different movie that was released the same year?
Brandon de Wilde -- I'd get him out of Shane. I don't care where he goes, as long as it's out of that movie!

12. Who was your favorite of Robert Montgomery's leading ladies?
Well, as I've seen almost none of his films, I can't rightly answer this.

13. You think it would have been a disaster if what movie starred the actor/actress who was originally asked to star in it?
I hear Gary Cooper and John Wayne had been the intended stars of Ride the High Country. As much as I love John Wayne, I'm really really glad he didn't do this one. I don't think it would have worked nearly as well.

14. An actor/actress who you will watch in any or almost any movie?
George Raft

15. Your favorite Leslie Howard film and role?
Alas, other than Gone With the Wind, it does not appear I've seen any of his!

16. You have been asked to host a marathon of four Barbara Stanwyck films. Which ones do you choose?
Ball of Fire
Golden Boy
The Strange Love of Martha Ivers
Jeopardy

17. What is, in your mind, the nearest to perfect comedy you have ever seen? Why?
Well, I'm not a comedy person, but I'd choose It's a Mad, Mad, Mad, Mad World -- only comedy movie that has no serious moments that I like all of, and only one I laugh at most of.

18. You will brook no criticism of what film?
N/A - everyone's entitled to an opinion! Criticize away!

19. Who is your favorite Irish actress?
Maureen O'Hara

20. Your favorite 1940s movie starring Ginger Rogers?
Haven't seen any other than The Barkleys of Broadway

21. Do you enjoy silent movies?
Yes

22. What is your favorite Bette Davis film?
None.

24. This one is for the girls, but, of course, the guys are welcome to answer, too: who is your favorite Hollywood costume designer?
Edith Head

25. To even things out a bit, here's something the boys will enjoy: what is your favorite tough action film?
One of my favorite types of movies! I have to pick one?? Die Hard.

26. You are currently gaining a greater appreciation for which actor(s)/actress(es)?
Olivia de Havilland

27. Franchot Tone: yes or no?
Yes! Mutiny on the Bounty has been a favorite since I was a wee thing.

28. Which actors and/or actresses do you think are underrated?
Van Heflin, Glenn Ford, Dana Andrews

29. Which actors and/or actresses do you think are overrated?
Bette Davis, Joan Crawford

32. Of those listed, who is the coolest: Paul Newman, Robert Redford, Steve McQueen, or Patrick Stewart?
Steve McQueen

33. What is your favorite movie from each of these genres:

Holiday: It's a Wonderful Life